Case Case Study: How a dating Smartlink helps you earn over $4,000 monthly

Hello everyone! In this article you can read an account of a case study from our partner. A small tip: if you want to find out about the bonus that everybody can get, there’s information about this down at the bottom. 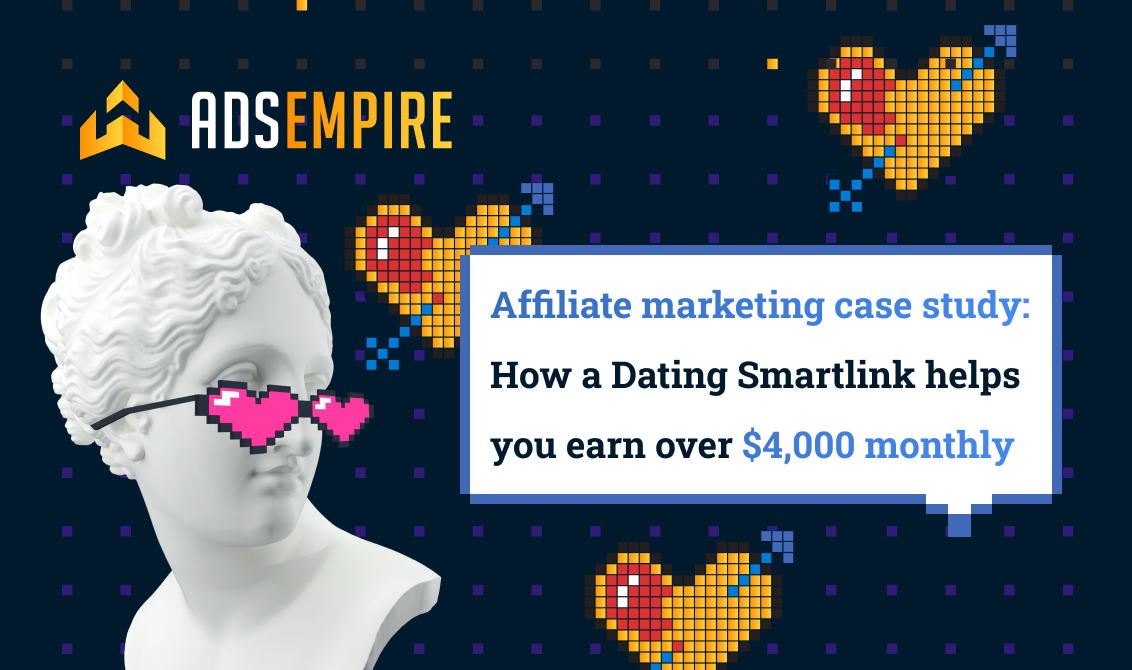 For over a year I’ve been working with a native traffic source. My primary focus is dating, as I understand the dating audience better, and working with it is more comfortable for me personally. I was making profit nearly from the start of my career in affiliate marketing. However, my first decent income was made as late as November. I worked with a single offer and traffic source that month using GEO scaling. I earned over $4,000 that month, which is an amazing result that I’d like to share with everyone.

How to choose the right affiliate program/offer

My profit rates for middle October were stuck in place for too long. There were even instances when they went down. Something needed to be done, and after a bit of a thought, I realized that my time, money, and effort were wasted on testing different GEO offers. Whenever I found a good one, it got exhausted pretty soon, and there was nothing I could think of to solve the problem. That was when I decided to try working with a Smartlink.

I started off discussing my plans with friends, reading up chats and reviews. The AdsEmpire Smartlink seemed worth trying, as there were more GEOs available for the affiliate program, not excluding Tier 1 countries. Besides, other affiliates were positive about their cooperation with AdsEmpire.

I’ve been cooperating with TrafficFactory over the last few months. What I did was test various networks and arrange GEO choice, traffic volume and quality, as well as cost per click. TrafficFactory turned out to be the best option for me, although it does have many good competitors.

I didn’t have to come up with anything new to succeed. A specific local language campaign was designed for each GEO. The creatives were unique for each location as well, and girls’ photos were chosen to match the tastes of the local male population. For instance, all girls would be black for South Africa.

My tracker of choice was Voluum. It’s not outstanding or anything, it’s just that I’ve grown used to it in analyzing traffic and key metrics.

I ran some challenging tests using creatives and native traffic sources. With the Smartlink I didn’t have to go through all the offers. My first choice was young and glamorous girls, but surprisingly, it did not work. I think that the audience has grown tired of perfectly photoshopped models. I started adding girls that were more “real”, and the CTR visibly improved. I ended up using photos of regular 40+ women, and the “home collection” style, which worked very well.

As I’ve found out, the CTR was primarily dependent on the grade of nudity in women’s pictures. Suggestiveness and mild erotica did not manage to massively draw in the target population.

My starting location was the USA, where I drove traffic and ran initial tests on such a big and affluent GEO. I’d like to note that every concept and approach for creatives that I tried for the USA subsequently worked for other countries. I scaled up, adding Europe (Sweden, the Netherlands, Poland, and Portugal) after half a month, and South Africa at the end of it. By the way, South Africa is a very peculiar location which I’m still busy with. It’s different from Europe and the US, but also promising.

My traffic expenses for November were $3,894, and I earned as much as $8,238 with the 111% ROI. Solid results! Below is a screenshot that I took from the affiliate account:

I can confidently say that my experience with the affiliate Smartlink by AdsEmpire was a huge success. I’ve never earned as much in my whole career in affiliate marketing. When an offer is no longer part of your equation, a good idea is to focus on other elements, such as creatives, for example.

Now that I’m working with the same Smartlink, I keep the European and US volumes while boosting the South African turnover and expanding to Spain and France.

I’ve got a few ideas as to where I should go next, and if it’s successful, I’ll share it with you guys.

We hope you enjoyed this case! Are you interested in sharing your experience of working with AdsEmpire? If yes, you’ll be eligible for a $400 bonus. Contact Viktoriia for more information on this and how to boost your rates.