The company discloses little information about how it enforces its prohibition of firearm sales on the site, leaving its punishment system shrouded in secrecy​

Facebook prohibits gun sales on its service. But buyers and sellers can violate the rule 10 times before they are kicked off the social network, according to internal guidance obtained by The Washington Post.

The policy, which has not previously been reported, is much more lenient than for users who post child pornography, which is illegal, or a terrorist image on Facebook, which prompts immediate removal from the platform.

A separate five-strikes policy extends even to gun sellers and purchasers who actively call for violence or praise a known dangerous organization, according to the documents.

Once a major marketplace for gun sales, which were sold in groups for firearm enthusiasts, Facebook prohibited such sales in 2016 amid pressure from activists and government agencies trying to strengthen gun control post-Sandy Hook. Other social media companies, such as Twitter, YouTube and TikTok, followed suit.

Facebook has maintained that it polices gun sales appropriately, arguing that such deals represent a tiny fraction of the content on its networks and that many who violate the policy aren’t aware they’re breaking rules since selling guns is legal in the United States.

But the company discloses little information about how it enforces its ban on gun sales, leaving its “strikes” system, which gives users who break any of the company’s rules a specific number of passes and a tiered system of punishments before they get booted from the service, shrouded in secrecy.
Internal documents and interviews with six current and former employees, who spoke on the condition of anonymity to describe company discussions, reveal that Facebook’s gun policies have long been a source of contention among the company’s senior leadership and policymaking teams, who have been torn between the platform’s support of free speech and public pressure to curtail weapons sales.


The ease with which individuals can buy guns has resurfaced into public debate after a mass shooting in Uvalde, Tex., resulted in the deaths of 19 elementary school students and two teachers, one of the deadliest massacres in U.S. history. The Uvalde shooter purchased the weapons legally from a federally licensed local gun store. Just 22 states require a background check for gun purchases from unlicensed dealers, who market their wares at gun shows and, increasingly, online, according to the gun control advocacy group Everytown for Gun Safety.

The rise of e-commerce sites has helped transform the market for firearm sales. Sellers and buyers have flocked to specialty websites such as Backpage, Armslist and Gunlistings along with traditional social media outlets like Facebook. The internet has become a haven for unlicensed gun sellers, hailing from states that do not legal require a background check, research shows.

“The gaps in the laws have made private sales without background checks not only legal but now really easy with online shopping,” said Daniel Webster, the co-director of the Johns Hopkins Center for Gun Violence Solutions. “The internet expands that ability to connect with so many people whether to underage youth, someone who’s got a domestic violence restraining order, (or) a convicted felon. They can very easily go online and find” firearms.

Gun safety experts and advocates who learned of the 10-strikes and 5-strikes rules when contacted by The Post described it as overly deferential to firearm sellers at a time when the internet has become a hub for peer-to-peer gun sales without background checks.
“Facebook’s 10 strike rule for prohibited gun sales is beyond shocking — it’s incredibly dangerous,” Shannon Watts, founder of Moms Demand Action, a grass-roots network run by Everytown, said in a statement. “Gun violence is tearing apart our communities and yet Facebook is more concerned about giving gun sellers not just a second chance, but 10 chances? That’s not accountability, that’s complicity.” 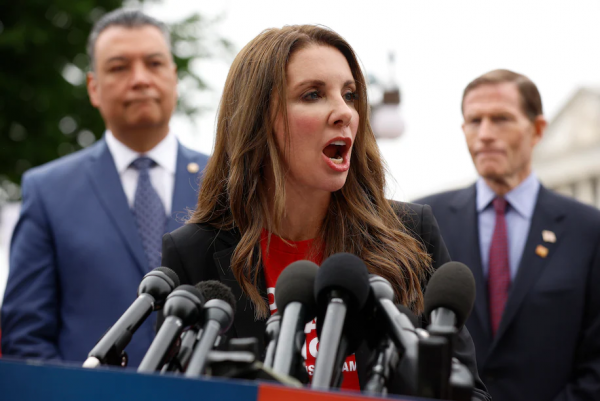 Shannon Watts, founder of Moms Demand Action, leads a news conference with Senate Democrats and other gun-control advocacy groups in Washington on May 26. (Chip Somodevilla/Getty Images)

“If we identify any serious violations that have the potential for real-world harm, we don’t hesitate to contact law enforcement,” Stone said. “The reality is that nearly 90 percent of people who get a strike for violating our firearms policy accrue less than two because their violations are inadvertent and once we inform them about our policies, they don’t violate them again.”

Other social media companies enforce their rules against gun sales and gun-related content differently. YouTube prohibits any content that is being used to sell firearms, including links to websites that sell guns directly, according to company spokesman Jack Malon. YouTube creators who rack up three violations within the span of 90 days will have their channel terminated. Video-sharing service TikTok bans users after the first time they violate the company’s rules that prohibit offers to sell firearms, according to spokesperson Hilary McQuaide.

Under Facebook’s strike system, certain actions, such as posting child pornography, a Nazi flag in a person’s profile or a terrorist image, will result in immediate removal from the platform, the people said. People who post misinformation on Facebook must post three times within 90 days before the company temporarily freezes their account.


Facebook’s website says most violations of its elaborate system follow a similar pattern: A first strike results in a warning; a second strike blocks a day of posting while five strikes trigger a 30-day posting block. The same tiered punishment system applies to gun sellers and buyers as well. But the company offers no further detail on what behavior warrants a full ban and doesn’t describe on how specific violations are treated compared with others.

“No social media platform has reasons for why their thresholds are what they are. Everyone’s just making up numbers,” one of the people said.
Gun sellers have seized on loopholes within Facebook’s policy. Journalists have repeatedly uncovered strategies sellers use to evade bans while reaching potential customers in dedicated Facebook groups or on Facebook Marketplace, the company’s classified services. One tactic is advertising gun accessories, like holsters or cases, which are permitted for sale on the platform; once a customer contacts the seller, a gun can be sold in Facebook’s private messages or through text message. After responding to several listings for gun cases, a Post reporter received three private messages with offers to purchase a gun.

Facebook allows its users to promote gun safety classes, gun shows and firearm raffles. It allows retailers that sell guns to promote their firearms through organic posts and other related products through ads. This includes Daniel Defense, the company that sold the rifle used by the Uvalde shooter and a pioneer in online marketing, which posts regularly on its Facebook and Instagram pages.

Company policies have also received pushback from gun industry groups. Mark Oliva, managing director of public affairs for the National Shooting Sports Foundation, argued that Facebook’s rules and enforcement were overly onerous on businesses conducting lawful commerce.
“We had concerns about the demonization and the banning of lawful commerce on these platforms,” Olivia said. “To do business, you need to have a social media presence.”


Facebook, the world’s largest social network with 3.64 billion users, began to reevaluate its practices around guns roughly a decade ago, in the wake of the 2012 Sandy Hook massacre and the 2015 massacre in San Bernardino, Calif. The company, which recently changed its name to Meta, owns WhatsApp and Instagram, and applies many of the same content policies to these services.

At the time, some of the company’s most senior executives, including Chief Operating Officer Sheryl Sandberg, argued that Facebook needed to outright ban gun sales in response to the mass shootings, according to two of the people. But Sandberg was countered by a key deputy — Joel Kaplan, vice president of global public policy — who, along with other executives, said that banning transactions of a product that was both legal and highly popular would alienate the political right, the gun lobby and millions of Americans who used the service, they said.

Externally, a coalition of activist groups, including the parents of the murdered Sandy Hook students, had begun to push the company to limit gun transactions. In 2014, then-New York State Attorney General Eric Schneiderman conducted a probe of Facebook’s platform, which he alleged was allowing people to evade laws requiring a background check in many states.

In response to the probe, Facebook and Instagram announced they would bar posts selling firearms where sellers intended to sidestep the law, and they sent reminders to gun sellers to comply with regulations. The company blocked users under the age of 18 from seeing posts of peer-to-peer gun sales. 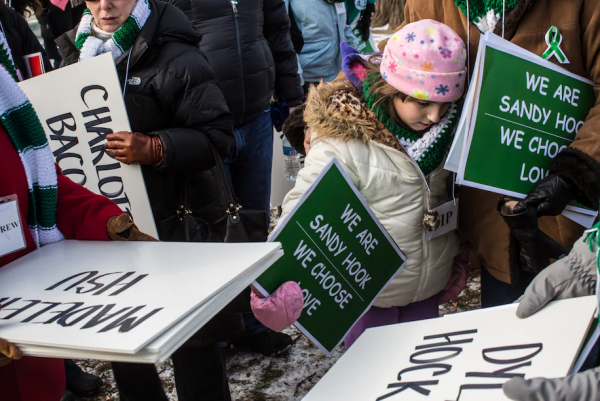 But the new policy was so incremental that even the National Rifle Association, which consulted with Facebook on its gun policies, praised it as a “measured” response that showed respect for “our constitutional freedoms.” The NRA didn’t respond to a request for a comment.


By 2016, Sandberg’s internal push won out, according to two of the people. The company banned peer-to-peer firearm sales as well as the sale of ammunition and parts. The company’s announcement came just days after the Obama administration issued executive actions aimed at gun safety, including a provision that people who sell firearms on the internet and at gun shows obtain a license and conduct background checks on potential buyers. In 2018, Facebook announced it would stop showing advertisements for gun accessories, such as cases and holsters, to minors.

“The pressure was too much,” one of the people said. But while the company was publicly praised for banning the sales, internally, enforcement was lax, they added.

“The number of strikes needed to actually take someone off was so great that the policy didn’t really make a difference. The only ramification was that a seller’s post was taken down,” the person said.

Until 2020, the strike threshold for guns was more than 10, said two of the people. That threshold seemed “too high” to many employees, who argued to reduce it to 10 strikes or lower.

By 2021, company executives were debating the penalties again; some were frustrated that the company shared little information about its strike system with the public. Late last year, Facebook created a five-strike rule if the gun seller had certain other violations. For example, a person who posted a statement of support for Hitler, and then posted about wanting to kill minorities, and then put up two different posts about selling assault weapons would not trigger the five-strike removal policy. In contrast, four gun sale posts and one post praising Hitler would cause removal. A direct or “credible” threat to kill a specific person warrants immediate removal, and a referral to law enforcement, but this happens very rarely, the people said. Facebook has the discretion to launch a separate investigation and take down offending content and accounts at any point.

The strikes system has come under scrutiny by the Oversight Board, an independent body that reviews Facebook’s content moderation decisions, which last year pushed the company to give users more information about how many strikes have been assessed against them and the consequences for continuing to flout the rules.

Now, as the United States reels from another spate of violence, gun manufacturers are continuing to turn to Facebook’s networks to promote their products. In the days leading up to the Uvalde shooting, Daniel Defense posted several photos of its guns on Facebook, attracting hundreds of comments and likes. “Let’s normalize kitchen Daniels,” read the caption of a photo of an AR-15-style firearm propped up against a kitchen cabinet. “What Daniel do you use to protect your family and home?”